On the occasion of the centenary, mountaineers from both sides of the valley met on Saturday July 9, 2022, to celebrate this first ascent and climb this mythical summit.

The unusual presence of the Pierra Menta astonishes the eye and gives it an air of legend. The origin would come back to the giant Gargantua. On the way to Italy, arriving at the top of the Aravis, he encountered a gigantic monolith blocking his way. He gathered momentum and sent a huge kick that made the pyramid waltz in the air... until it froze 8 leagues away, in the Beaufortain mountain pastures !

Father Joseph Amédée Plassiard transcribed the legend in his own way “A giant, it seems, fled the reprimands of his wrathful wife when he came home too late. He went, muttering scornful oaths, tearing down houses across the countryside. And with a great kick dug in the mountain this hole which is still called Breach of Parozan. The detached piece therefore came to rest there. It remains the witness of domestic scenes that troubled the earth in the most distant ages, leaving until us this formidable brilliance, the Pierra Menta. »

The 5 July 1922, three young mountaineers from Grenoble carefully scrutinize the faces of the Pierra Menta to find a line of weakness. Prepared for a real expedition, they are ready to attack. They set their sights on the west face. On July 6, Jean-Paul Loustalot, nicknamed the tramp of the mountain, and Léon Zwingelstein stand victoriously at the top of the Pierra Menta.

Jean-Paul Loustalot says: “We arrive on the South ridge, 4 or 5 meters from the summit; there no trace of human passage, only the lightning left its mark, blackening and disintegrating the rock. Our climb lasted exactly one hour. We were very exposed, for about thirty meters especially. The Pierra Menta represents a beautiful climb, short but vertiginous; the rock of fine-grained puddingstones is good but a bit cut. »

The next year, J. Payot and F. Petelongo went up the east face and down the north ridge. In 1939, Couttet and Mermillod climb by this same ridge which will then become the most frequented route. In the 50s, Bérard and Rigotti proposed a route on the east face. Abbé Bérard undertook to plant a cross there at the top… it ended up tipping over on this same face because of lightning in 1967! More recently, many climbing routes have been equipped. There are more than twenty of them.

100 years later, the rope party of James Mérel, Eric Charamel and Aandré Pélissierde, guides from the Compagnie des Guides de la Vanoise, repeated the route and placed a plaque to celebrate this ascent. Clothing fixed at the level of the narrow ledge, it indicates the famous crossing described by Loustalot: "a very delicate flank step on a barely marked cornice". A team of two Beaufortain guides, Jacques Maurin and Xavier Cailhol, repeated another historic route on the SW pillar opened by Deschamps and Roux in 1961.

On the occasion of the centenary celebrations initiated by Jean-Louis Silvestre, Deputy Mayor of La Côte d'Aime, and Christian Vibert, elected in La Plagne Tarentaise, around a hundred mountain enthusiasts from both sides of the valley met you to celebrate this first ascent.

Partner of the centenary, the CAF Albertville proposed an orienteering race bringing together more than forty participants who joined the drink organized by the Presset refuge.

The PGHM, also present on this occasion, had opened two routes on the Pierra Menta. The most traveled Dao Domi, walks cleverly on beautiful walls and offers a royal and accessible route to climb to the top. Named in this way, it perfectly pays homage to Dominique Chassagne and Jacky Daolio who both died in 1989. According to Jean-Pierre Mirabail, former commander of the PGHM who participated in its opening, “it is probably the most traveled route on the Pierra- Menta thanks to the choice of the route but above all, from the will of the setters to place suitable equipment so that a climber, just unscrambled, can make his debut on a route of several lengths by passing at the head. Attendance makes me say that at the time, we made the right choice. "
On July 9, 2022, around twenty roped parties climbed to the top of the Pierra Menta. By its characteristic puddingstone rock, for the beauty of the landscape and the variety of routes, the Pierra Menta must be climbed at least once in your life!

La Beaufortain Guides House associated with the event also offers accompanied outings throughout the summer to safely climb the Pierra Menta by one of these many routes. A truly mythical summit by its legend and its fame, which every climber must climb at least once in his life!

Throughout the summer, you can also enjoy the exhibition offered by the municipality of Beaufort as part of the centenary of the first ascent. Located at the Méraillet pass, on the Cormet de Roselend road, it retraces both the history and the legend around the Pierra Menta with old and recent photos. You can also find it on the Tarentaise side, at the Balme refuge.

As every year, during the second weekend of August, the Folk Festival of the village of Arêches takes place. Between 5000 and 7000 [...]

5 activities to do around the lakes: nature and freshness guaranteed

Do you want to escape the heat wave, the crowded beaches and recharge your batteries in the heart of nature? This summer, you will find what you are looking [...] 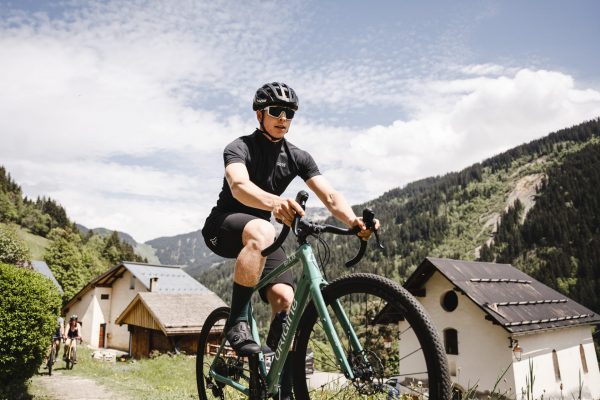 The Beaufortain is a magnificent playground for Gravel with a full range of surfaces: small roads with little traffic, beautiful [...]